The intelligent lockdown: a story of deadly delays, misguided trust, and lack of accountability

When the first Covid-19 cases emerged in Europe a year ago, I considered myself lucky to be in The Netherlands, a country where the authorities were organized and sensible, presumably well-prepared to handle such a crisis - or so I thought.

Then I quickly became horrified.

At first, I was unnerved by the downplaying of the pandemic, similar to the approach in Sweden and the UK; the “no need to panic and change your behavior” announcements. While the Dutch authorities eventually changed their “herd-immunity strategy” (without admitting they were wrong), there has been a long series of false statements, harmful official advice, and a complete lack of accountability.

A detailed timeline of the Dutch authorities’ erroneous statements and disastrous (in)actions can be found here: containmentnu.nl/articles/timeline.

With the pandemic already raging in Europe, back in March 2020, the National Institute for Public Health (RIVM) explicitly stated on its website that there was no need to avoid crowded events. It was one of the first obvious mistakes made by the Institute and its director, Jaap Van Dissel. Preventive measures in medical centers, elderly care, and schools were completely absent. There was a ridiculous insistence on handwashing for preventing an airborne disease, while even pregnant women had to insist on medical personnel wearing masks around them, sometimes unsuccessfully. 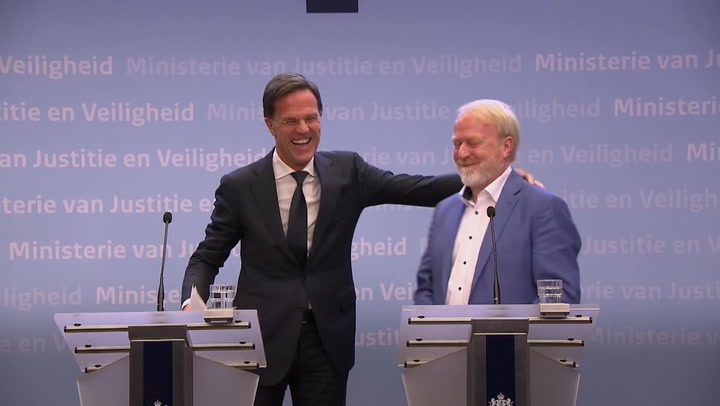 It took many months for the Dutch authorities to (grudgingly) admit the obvious fact that masks are useful in reducing the transmission of this respiratory disease. There have been cases of people being reprimanded at their work for wearing one (because “there was no need,” and they were “scaring people”). When, eventually, authorities did advise wearing masks, they did so in very limited circumstances and insisted they had to be “non-medical” (in other words, the least effective ones). It was surreal, and many people died simply because of this ridiculous stubbornness.

Then there was the misguided arrogance. “Here we do things differently” (unlike in other countries where authorities panic for no reason, it was implied). “Our lockdown is intelligent” (not stupid, like everybody else’s, it was implied). “We will not start the vaccination program too soon to show-off” (as other countries do, it was implied). These messages were fed to the public, and many took them at face value. You can’t lose votes by telling your citizens they’re smarter than other people, I suppose.

Just like in Sweden, the “experts” wanted to appear in control, not to be overreacting and being “smart.” So they addressed a mass-panic they imagined was imminent instead of advising a change in behavior. During the first wave, PCR tests were rarely used due to an anticipated future shortage of tests, which never materialized. Masks were not recommended because “people might not wear them correctly,” and doing so would “give them a false sense of security.” At the time of this writing, millions of fast coronavirus tests remain unused because the government “wants to take a careful approach” to using them. This sort of overthinking and junk science has led to major, deadly delays, as authorities addressed imagined future problems more than the pandemic itself.

But what shocked me the most was not the “experts” getting it so wrong; it was the public’s lack of reaction. Besides the fringe virus deniers, almost nobody was questioning the authorities or raising legitimate concerns about their slow reaction and mistakes - not even the media. Anyone who tried to would get shut down and referred to the “official guidelines.” Prime minister Rutte stated clearly that the goal was not to prevent people from being infected, but to not overwhelm the hospitals. Many citizens simply accepted this collectivist “herd immunity” approach, where those outside “vulnerable groups” were intentionally left unprotected, so they could get infected.

There was an eery sense of blind trust and obedience in the air. In a secularized society, local “experts” became gods. To this day, although responsible for countless deaths, none of those who made demonstrably false statements were accused of anything. They didn’t even lose their jobs; instead, they continue to appear on TV and give advice.

They refused to acknowledge the role of both asymptomatic and aerosol transmission, despite overwhelming evidence; there was little acknowledgment of Long-Covid and its impact; children were treated as if they were immune to this disease, with zero measures to protect them, and the life-threatening MIS-C that affects some children was not admitted to be linked to Covid-19 for a long time; masks were rarely used in schools; the official death count was not updated to include the people who died of Covid-19 but were never tested.

The vaccination campaign was the last to start in Europe. Its pace is excruciatingly slow, due to over-planning and trying too hard to be “fair”: vaccines are waiting in deposits, those who want them can’t get them, as the authorities patiently wait after each group they decided had priority to schedule themselves. And people can’t chose the vaccine. Many only have the option to take the AstraZeneca one, which is the least efficient and has the most concerning side effects (but it’s the cheapest).

So, the downplaying and missteps continue, and nobody is pressing on these issues. In a consensus culture where disagreeing is frowned upon, whenever someone tries to raise the issue of mistakes and accountability, they get shut down quickly with statements such as “everyone does their best” or “who are you to know better than the experts.” And, despite all the evidence to the contrary, including the awful vaccination pace, which cost who knows how many lives, it appears that most people think the government has performed very well so far in handling this crisis. This, for me, is simply mind-boggling.

In a country where the authorities usually do a decent job, people have become complacent and are used to trust them and to defer critical thinking to the “experts”. While this approach works in many cases, it painfully demonstrated its limitations during this pandemic. Coupled with wishful thinking and national pride that makes people uncomfortable thinking their authorities might be less competent than others, it muted essential criticism.

I’m writing this to document my impressions during these times. My view of the Dutch authorities and society has changed in the past year. In the meantime, we traveled to Romania. The government here recommended masks early on, the vaccination campaign is going fast (people can schedule themselves online and chose a vaccine), and there are open discussions and criticism on each measure. We might not be safer here in the grand scheme of things, and there are definitely areas in which the Netherlands does better, but, at least for now, the advice and measures here make more sense to me.